I've been watching period movies pretty much non-stop for the last three days for inspiration for a new hairstyle tutorial.

My favorite thus far was the three part German movie, Sissi, about Empress Elisabeth of Austria. She was known for her beauty and hair. Even today, her hair is a source of interest and hairsperation. 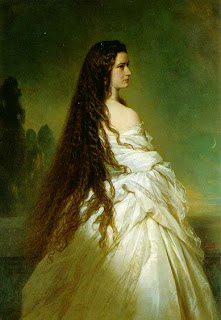 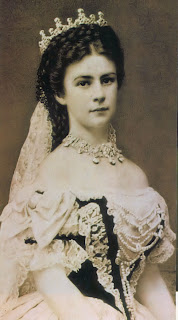 Elisabeth was absolutely stunning and her hair was something to marvel at, even among the many long haired women of her time.
Here's a photo of Romy Schneider as Sisi in the movie (Sissi), for comparison: 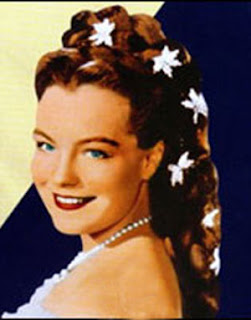 I consider myself pretty good at figuring out how to copy hair styles. Watching the movie, Sissi, though, led me to come to the conclusion that there is just no natural way to accomplish her hair styles. Although she had a huge amount of hair, which varied from knee length to ankle over her lifetime, she would need about twice as much hair to accomplish her signature look.
It appears to me that two braids are taken from either side of the head and wrapped in a circlet about her head. The remaining hair was braided into four or five braids. The braids were each draped and pinned at the opposite side of the head. I'm thinking swatches of hair were plaited into each braid to enhance the thickness. I believe she used a snood in a similar color to her hair  to keep the braids together.
If I did this style to my hair, my braids would look puny and thin, even though my hair is pretty thick. Each of her braids was roughly the equivalent of half of my hair braided. For six to seven braids of this thickness would be impossible to achieve naturally.
Elisabeth also didn't dress her own hair. Attempting this style on my own hair would require strategically arranged  mirrors and super strong arms. If I had an army of ladies in waiting, I'll bet my hair would look as awesome.
I'm watching The Crown Prince as I'm typing this, hoping to find more hair styles to attempt to copy. Incidentally, this movie is about Sisi's (that's the correct spelling, by the way. The movie had it wrong.), son, Archduke Rudolf, who apparently killed his mistress, then committed suicide. It is said that the Empress never recovered from the loss of her only son.
Anyone have any period movies I should watch for hairsperation? My only caveats are that I don't use product in my hair, it needs to be something I can do by myself, and I won't be using hair swatches, falls or rats. Anyone?
Posted by Jessica at 11:29 PM